The last day at your company is always emotional. Memories of the time spent together with your colleagues flash in front of your eyes. You understand that these moments are gone and shall never return and you move forward. It was my last day at Dataweave and a short weekend before I join Ather Energy. The body wanted a decent rest to start afresh for the new journey, but the heart wanted to be free. I sided with the heart and went on a solo trip to Hampi.

The morning didn’t start well as the sleeper bus was a pain for the back. I visited the Mango Tree restaurant for breakfast where I found a french lady. She said she had been here for more than 10 days now. Got some suggestions from her about the places to be visited. I was astonished to find that she was working on curing people’s emotions with flowers. It was something that I have never heard of; albeit a very common profession in Europe. Thanked her for the a good conversation and set out to have an awesome trip.

At Hampi you can easily find bicycles for rent at a cheap cost. Since I wanted to be on my own I decided it would be a very wise investment. Hopped on to my bicycle and set out for a waterfall that the lady had suggested. She had also asked to take a guide to the place or else you risk of getting lost. But that’s what I wanted, to be lost and I wasn’t disappointed. At the end of road I had to park my bicycle and walk on foot. It was just banana trees there and nothing else, no humans, no network, nothing. I have always relied on the fact that I would find my way by seeing maps, by asking people around. But here, all that aided me was my instinct, it was a unique experience. How less do we utilise it nowadays. I din’t find the waterfalls, but the experience of being lost is something that I recommend everyone to feel.

Next, I set off for my guest house. This was across the Tungabhadra river. Had a decent shower there and rested for a while before setting out for Sanapur lake. It was actually fun riding a bicycle on the road, feeling the nature beside you and enjoying the cool breeze that aided the journey. I was suggested to have a bath at the lake, but unfortunately the water wasn’t that clean. So I relaxed at the banks for a while and then came back to my stay. The previous month was a bit hectic and I needed decent rest, so I just lay down in the cafe and enjoyed the scenic view.

I wanted to end the day with a perfect sunset for which I had to visit the Anjaneya Parvata. A steep climb of 600 steps is the effort needed to ascend the hill. I reached there early and had an interesting conversation with two fellow travellers. One of them was from France, working at Chennai as a perfumer. I was in awe about the different kind of professions people had. There was a small pool at the top in which the monkeys used to take a dip. It was fun watching them show off their diving skills. The clouds obstructed the sunset and we had to return disappointed. But the cool air compensated for the lack of a great view. I returned back to my guest house and had a sumptuous dinner before sleeping.

Felt very relaxed in the morning. Had a quick bath, checked out the room and started towards the city to explore the different temples. Halted at a roadside shop for a breakfast and met a guy from Korea, Won. He had just arrived and was looking to explore the city. I invited him to join me and he agreed. We started from the Virupaksha temple, visiting Ganesha temple, Vishnu temple, Badavalinga on the way to the Royal enclosure. The best thing that I enjoyed is we could stop anywhere and spend some time relaxing. This is one thing that differentiates it from the cycle tours that the various guides offer. We visited all the places en route and landed at the museum. The journey from there to Vitthala temple was the best part of my trip. It was ride to be remembered. 6 kms of awesomeness, peace and freedom. Finally we reached the Vitthala temple and admired the beauty of the Stone Chariot.

An interesting part of the ride is that you end up at the starting point; Virupaksha temple after completing a round trip. The road from Vitthala temple to Virupaksha was difficult especially with our cycles, but we made it. After relaxing for a while, we returned the cycles and started for Matanga hill. At the Hanuman temple I had seen many people climbing and descending, but this place was desolated. We found a fellow solo traveller who accompanied us to the top. The view from the top is mind blowing. It was disappointing to find the clouds in place to block another Sunset, but we sat there just to enjoy the view. Nature had other plans and at 6.30, a small gap emerged between the mountain and the clouds to reveal the best Sunset of my life. A hot tea just made it perfect. 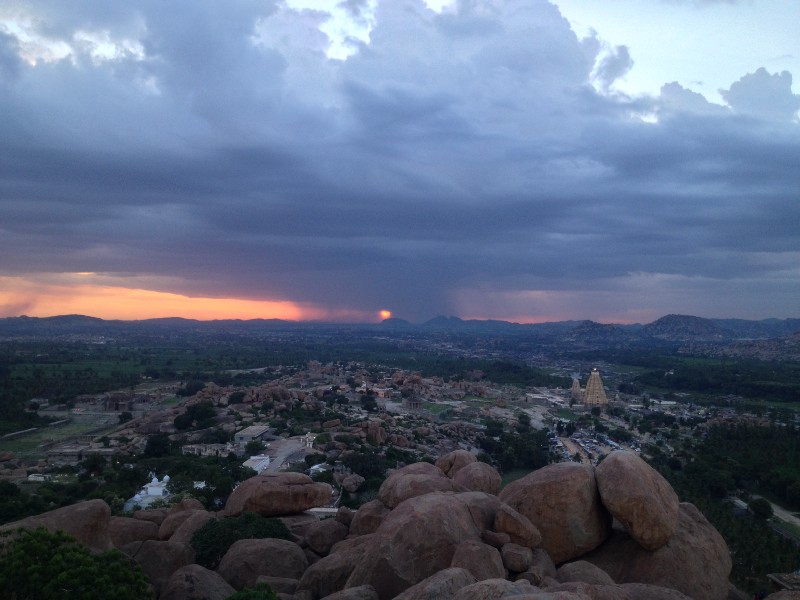 Descended back to the city, had a heavy dinner before starting my journey back to Bangalore. Bid goodybye to Won and thanked him for being an awesome companion.

I have read it many times. Today, I have experienced it :)

It’s not the years in your life that matters, but the life in your years

An Ever Accompanying Mirror

There was a planning event going on at the office. This is when we set our goals for the…

The movie Matrix was a classic. Once we realize how much thought process has gone into the concept and…