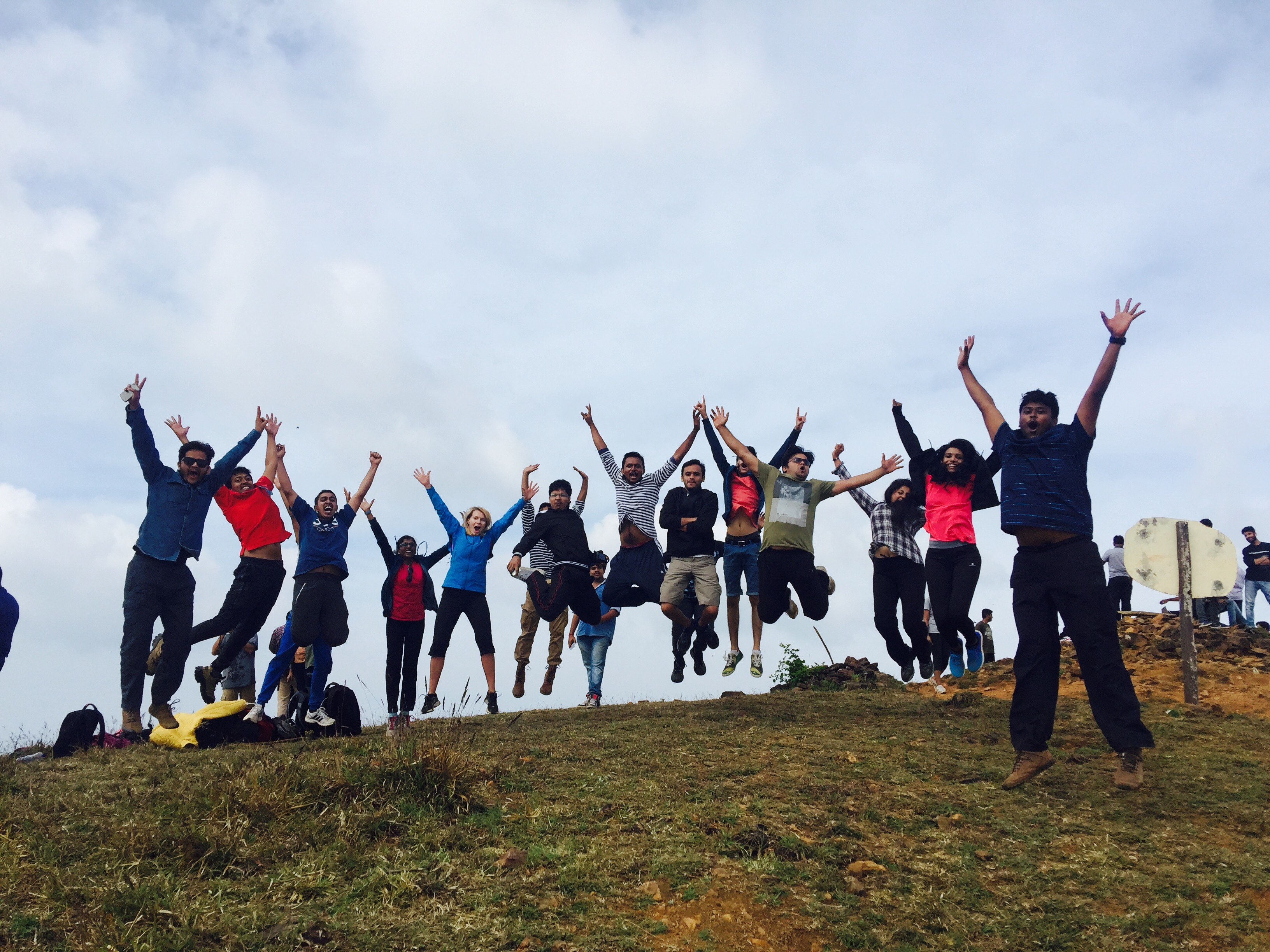 Exciting things happen when you have exciting people around you. It was my first weekend home with the all the new roommates together. Out of the blue a plan came up for watching the Barca vs Real game at a nearby pub, yeah we are all football fanatics. Watching the movie Moana was next. One thing led to another and we ended up booking slots for the Kudremukh trek next weekend.

Being my first trek spanning 2 days, I was scared whether would be able to complete it or not. What better way to know other than trying it out. The pickups were smooth and once everyone - a group of 30 people, boarded the bus, the journey had begun. Get Beyond Limits - our trekking organizers, seemed a hyped title initially and my expectations from the co-ordinators were limited. I was wrong. To my surprise it turned to be best pack of co-ordinators. Sai Pavan, Amrut Raj and Ramya turned out to be a great pack.

The fun started with the traditional GBL intro session where everyone had to mention 4 things:

We had a guy with us who had hugged Scarlett Johansson. I envied him already!

Psychology has many aspects to it and turns out that this is an effective way to bond strangers and get them talking. It did work. Within moments there were chit chats around. We stopped for a loo break at a CCD and I can already see groups mingling among themselves, sharing their experience and much more. Never felt like I was with strangers anymore. The journey continued and everyone had a good night sleep, saving their energy for the big day tomorrow.

We ascended the hills early morning, curiously waiting to reach the base camp. Finally the bus halted and it had the reached the max it can. The rest was upto us. The base camp was 6km from here and we were transported through jeeps. The last group of us got the opportunity to travel in an open jeep. We boarded it like animals and this is where the joy began. It was a ride to remember. The roads were pretty narrow and curvy. The adventure had begun.

Finally we reached the home stay at the base where we freshened up, had our breakfast and prepped for the trek. We were given packed lunches and power packs to be had at the peak. The co-ordinators boosted our spirits with these shouts:

After a group photo everyone was ready for the experience.

The moment had arrived. I had to conquer the giant. The best part was it was no longer me, but 'us'.

A slow and steady start got everyone going. We had stops in between so that the whole group stays together. The landscapes were beautiful, accompanied by the sweet streams it was an enthralling journey. Another interesting thing here was that we had packed just 1L of water. The rest was consumed from the streams en route. The natural touch along with sweetness kept us going throughout our trek. The steepness at some points did produce some pants, but after a momentary rest I was good to go. Had interesting conversations with my group members, knowing about them. It seemed a different experience altogether.

Reached the peak after a 4hr trek and it felt like an achievement. The giant was conquered. The view from the top wasn't awesome but the journey had already given me an experience of a lifetime. Had lunch and the powerpacks. The puliogare seemed like a dish made by the gods. It was delicious (or maybe I was just super hungry). Had a decent rest here. Waited for all our group members and had a series of photoshoot. The co-ordinators were surprised to see that all of us barring one had made it to the top. The average from the previous treks was 10/30. I had a vibrant group :).

Started our journey downhill and this was completed in a jiffy. Well not exactly. It did take us 3.5 hrs to reach back. At no point in the trek I wanted it to end, but this a truth I have come to realize - All good things come to an end at some point of time. Maybe they are meant to, to make us realize their importance. Whoa!! deep thoughts.

The hosts served us with hot bhajjis and coffee. Dinner followed soon and a not so happening bonfire ended the day. Everyone was tired and needed rest. With just 1 blanket per person and a temperature of 13 degrees to bear, it was difficult. Eventually it did pass and I had woken up at 5am to finish up the necessary tasks ;). The plan was to visit a waterfalls nearby. Don't know how I agreed to it as even opening the door brought shivers inside. It was freaking cold out there.

Interestingly all the girls from our group woke up in time for the waterfalls experience. Got to them the credits. The guys were a few, very few. The path to the falls was adventurous and it added to the fun. Initially we had ascended the topmost point among rocks and spent some time there, waiting for the Sun to make the water warm. A dip under the waterfalls was on the cards. A few of us went under the falls and it felt extremely cold. I have always enjoyed waterfalls. Spending some time beneath them gives great peace to the mind and the body. We returned to the homestay, had our breakfast and started back for our journey home.

We visited a tea plantation on the way and it was a beautiful sight. Had a beautiful view of the western ghats accompanied by some great music. I was at peace. We even played the game Mafia and it was fun. The villagers always won \m/. Had lunch on the way.

Happiness is getting change for your 2000rs note. :D

When the end was near, everyone agreed on staying in touch and thanked each other for the great company. With that the journey came to end, my most memorable one. I couldn't be thankful enough to all of them and the GBL guys for an awesome experience.